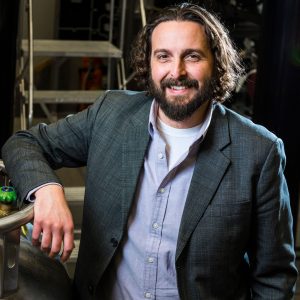 John P. Davis is a professor of physics at the University of Alberta in Edmonton, Alberta, Canada and is the CTO and Co-Founder of Zero Point Cryogenics. His research group performs cryogenic research focused on macroscopic quantum objects including quantum opto-mechanics and superfluids in confined geometries. Zero Point cryogenics is a company that he spun out of his research group, and it sells specialized dilution refrigerators used for low-temperature research.

John has a BS in physics from Washington University in St. Louis, Missouri in the United States, and an MS and PhD in physics from Northwestern University in Chicago, Illinois, also in the United States. After completing a postdoc at the University of Alberta, he received an offer to stay on as a faculty member. John recognizes the importance of teaching his students about the private sector and has invested significant time and resources in this effort, including developing and teaching an entrepreneurship class and launching a couple of companies with his students.

Below is an excerpt of my interview with John to discuss his career and private sector collaborations. (Look for the full interview to appear in my forthcoming book, Shaping the World: The Privilege of Being a Scientist in Industry)

An excerpt from our conversation:

Dave:  How did you first become interested in working with the private sector?

John:   Since becoming a faculty member, I realized most of my students who leave with a master’s or PhD are not going to be academics. That opportunity simply isn't there because there are just not enough academic jobs. An academic career isn’t even well suited to every graduate student, based on their interests or their skills. And yet, we are training them to be academics, as we have been for generations.

I started thinking about what it takes to succeed in industry and how I might be able to build industrial connections that would help my students. One of the things I did was to develop a course in the physics program called ‘Physics Innovation and Entrepreneurship’, where we read popular business books and try to interpret them through the language of physics.

As an example, we read this business book called The Lean Startup, which talks about developing a Minimum Viable Product (MVP) and then getting it out into the market to test it and see if it’s what the market wants. If it isn’t quite what the market wants, then you revise it and test it some more. The book uses all of these industry words to describe the process, but as a scientist you realize the book is just telling you to build an experiment, do the test, analyze the data, and revise your hypothesis. This book was a revolution in the business world, but it’s really just the scientific method applied to business.

We've had a lot of fun in that class, and I think it's refreshing to a lot of the students who have realized that they would rather work in industry. Business can be a bit mystifying at first glance but there's nothing insurmountable about it. A lot of it is just learning new jargon.

In my opinion, there's nothing that a well-trained scientist can't do in the business world. In fact, I've had a couple of students take the class and then go off and be legit entrepreneurs, starting companies and seeing if they can make a go of it.

Dave:  I’d love to hear more about that.

John:   Two of my students who were brothers, one was a graduate student, one was an undergraduate, decided they wanted to be entrepreneurs. They had been working on an applied project in my lab and they wanted to see if they could take the next step and turn it into a company. I agreed to support them to the best of my ability, just like I do if someone wants to do a postdoc and build a career in academia. In this case that support included me writing a small check for some startup money. The company was called Resolved Instruments, and it developed and sold advanced digital laboratory electronics.

Starting that company was a really fantastic experience. It did make money, but not quite enough to support the salaries of everybody in the company, so it didn't last as long as we might have liked. We made some mistakes and we learned from them.

But another one of the things that you hear in the business world is that you should have at least one failure under your belt, but that’s not new to us scientists either. As scientists we know it often takes time to figure out how to get your research project to work, and no one will believe you if you say that all of your research projects have worked out just the way you expected. It’s very similar in business. If every business you've ever tried works, people will think that there's something suspicious. Failures and some experience under your belt lend to your credibility.

Dave:  You started another company after that, right?

John:   Yes, in 2017 my students and I founded Zero Point Cryogenics here at the university.  In many ways it’s just that same practice of exploring something I thought would be interesting.

Dave:  How did that opportunity come about?

John:  One of the great things about being in Alberta is that there is a lot of science funding that comes from oil money. But the motivation behind the funding is improving the jobs and the economy in the province, so the provincial funding agency asks you directly how you are going to improve the jobs and economy in Alberta with the funding they give you. I took that question very seriously. Employing graduate students is certainly valuable for the local economy, but I thought a lot about how I might create additional jobs and positively affect the economy beyond just employing graduate students.

I realized I couldn’t turn my research into something that that's useful for more jobs today. My research is pretty cutting edge, and there isn’t anything that would be commercially applicable that would allow me to start a business. But I thought maybe I could make and sell the tools that we use in my research group to create jobs.

My research is in ultra low-temperature physics, so the tools are dilution refrigerators and other cryogenic instruments. I thought that maybe these advanced techniques that we use to do our research would be applicable to the quantum revolution that is happening right now, so that's what we decided to do. We sell the lab equipment we use for our own research to companies who need cryogenic platforms for developing technologies for quantum computing, sensing, and communication.

We founded the company in 2017, and in 2018 we got our first grant, which was an applied research grant that went through the university. We worked on that for three years, until the summer 2021, at which point we realized that this might really work, and we should move it out of the university and turn it into a real company. So we spent last year turning the company into a real company, incorporating, hiring an accountant and a CEO. All the work of setting up a business and doing it properly takes a lot of time.

Dave:  Every startup has to find a way to get seed funding to get started. You used research grants to launch yours, founding it as a university project?

John:   Yes, and I was rather fortunate to be able to do that. I had been saying for years that I’d like to start this company, but our particular hardware is expensive, and it took me a few years to find the right grant that was enough money to get it off the ground. I would have started the company earlier if I’d found the right money. There are more opportunities for starting a company if you can build your MVP for cheaper than we could.

Dave:  Does your company allow you to retain a good student after they have graduated so you don’t lose them?

John:   Absolutely. Right now, our lead scientist is someone who graduated with a PhD from my group three years ago. He went off to work for industry for a little while and when I contacted him with an open position, he came back. That’s a great hiring opportunity, to bring in someone you already have an eight-year relationship with and trust.

This site uses Akismet to reduce spam. Learn how your comment data is processed.

Want to learn to play the game?