An interview with Matt Baldwin, PhD 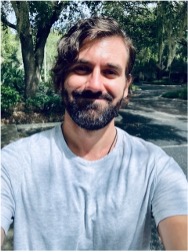 Matt Baldwin is a Quantitative Scientist at Noom, a company that makes an app for tracking eating and exercise habits.

Matt found that the reality of an academic career did not match his expectations that academia was the ideal career path for the science researcher. This realization prompted him to take a risk and transition out of academia into the unknown world of industry. He has found that the dynamic world of the private sector, where expectations are concrete, tangible results come quickly, and the challenges are shared by a collaborative team, fits him much better.

Dave:  You started your career following the academic path but then switched to industry. What’s the story behind that?

Matt:    I guess I always wanted to be a faculty member. The story of pursuing knowledge for its own sake and having the freedom to build your research group the way you want seemed very romantic. Joining a university felt like joining something bigger than yourself.

When I started grad school in 2010 it seemed to me that the only real career option was to become a professor, but that sounded really nice. I’d been doing research as an undergrad, and by the time I was well into graduate school I felt like I had found my calling in research.  I really loved data analysis and telling stories with data.

When I finished my PhD, I took a four-year postdoc in Germany. That was a great experience and further solidified academia as what I wanted to do with my life. After my postdoc I got a faculty position at the University of Florida, so I came back to the US to begin what felt like a realization of the career I’d always wanted.

But where it all changed was when it came time for my third-year review. This is a pre-tenure step where you assemble a portfolio of your papers and credentials, and you meet with your committee to review your progress. I just could not bring myself to start that process. I realized that I’d started feeling very disconnected and even disillusioned with the path I was on. As I dug deeper into why I was having trouble, I concluded that I could better apply my skills somewhere else…somewhere that was better aligned with my interests and values.

Dave:  Had you realized that perhaps the academic career path wasn't really as romantic as you had originally imagined?

Matt:    Yes, but there were also many shifts that happened in academia between 2010 when I started graduate school and 2019 when I got that faculty job. I came to realize that the picture was not as rosy as the generations before me had made it sound. Trust in academic science had waned and the level of competition in the job market had increased dramatically. The number of PhDs awarded versus the number of current job openings in psychology is just ridiculous.

Also, my graduate students were basically getting paid poverty wages. I started feeling morally uncomfortable with asking my students to work as hard as they needed to work knowing that they could barely afford rent. I had grants that I needed to make progress on, and I couldn’t do my work without them, so I had to exploit my students who don't get enough money to live. I was also being asked to do a lot of unpaid labor in my faculty job. It just felt very wrong, and I just couldn't justify that anymore.

I started wondering how we are so willing to accept such a system, when right next-door PhDs with similar skills and experience are working for companies that value their time and pay them accordingly. Industry seemed to be a system where work-life balance is afforded as opposed to in academia where you have to fight for work-life balance. When I stepped back and looked at it more objectively, I felt like this it was all a bit of a scam. It made me think of how people who get into a cult can lose touch with reality, and then when they leave, they’re like, ‘Wow, how did I miss that?’

And finally, in Florida the state government was starting to get involved in what could and could not be taught and academic freedom was being diminished. I felt like the potential of what a university could be is not what's going on at all.

Dave:  You mentioned that when you finished your PhD, it seemed like a faculty job was the only career option you had, but now you’re a lot more aware of careers outside of academia. Can you say more about that?

Matt:    The culture in academia led us see being a professor as the most noble and well-respected position at the end of the PhD. Universities need the people they train to end up becoming faculty someday to replace the ones that retire, so there is an incentive for professors to encourage PhD candidates to follow them into academia.

When I went on the job market the first time around 2015, the phrase ‘alt-ac careers’, or ‘alternative academic careers’, wasn't really in my vocabulary. I think companies like Facebook weren't hiring many user experience (UX) researchers at the time, and the jobs that I could have gotten outside of academia were government jobs, or public health department analysts, or maybe some company marketing roles. Those just didn’t seem like a viable path for me, and I’d had no exposure to any other options.

But I think now more students are being introduced to this idea that there are many other ways to use a science degree. The skills that come from psychology training are sought after in all kinds of fields right now, so it’s easier for a psychology PhD student to see that as a career path option. It seems many students are demanding better training for jobs outside of academia.

Dave:  How did you go about finding that first job in the private sector?

Matt:    I thought about transitioning for a long time and had been active on LinkedIn, networking a bit and seeing what opportunities were available. But then I was at a big psychology conference in San Francisco and met up with a friend who had been a postdoc with me in Germany. She was living in San Francisco and had just started a job as a behavioral scientist at Calm. I jokingly asked if she could get me a job where she worked, and she said that they were actually looking for a statistician. I laughed and said that I would apply just for fun, but when I went back to my hotel that night, I did apply for the job, just to see what would happen.

My friend referred me for the job from inside the company, so I was very quickly invited to do an interview. I had decided that making this transition wasn’t going to be easy, and no amount of preparation or waiting would make it any easier. I went to the interview without much preparation and decided I would figure out the next steps if I got the job.

I did get the job, and the whole transitioning process went quickly. I applied in late February and started in April, so in a matter of a month and a half I had to go through the whole process of alerting my department chair, finding a place for my graduate students, and shutting down my lab. I made a real effort to minimize any harm to my students, and it was very intense for a while.

That was my way out of academia. I feel very lucky someone was there nudging me to take the opportunity, and I’m glad I went after it. The culture in academia is so strong that I suspect many people think about leaving academia for many years, and by waiting so long they lose the chance to make the change.

Dave:  What was it like to go from being professor to working at a company in a month and a half?

Matt:    It was definitely a whirlwind. Learning the business lingo was a bit intimidating, especially when I’d need to present data. A slide I create could be used by the marketing team for an important presentation, so I needed to craft it in a way that non-technical people would understand.

I was a part of a big hire to build a new science team, so there was a big effort to integrate with the rest of the company. I didn't realize how collaborative it would be in the private sector. You are told that in academia you get to collaborate with other researchers, but the reality is that in I would often go into my office and not see another human being for eight hours. I guess was collaborating with my co-authors in academia, but it didn't feel very collaborative. At Calm things were changing all of the time and I had dynamic teammates to interact with regularly. Being a social person who needs lots of things going on, that was really fun for me.

The potential for impact in the private sector is so much greater, so there’s a different kind of pressure than in academia. In academia I felt a lot of pressure to be somebody they wanted - to compete and be the greatest. In industry I feel pressure to make a good product, but that feels more collaborative and less like I’m carrying a huge weight on my shoulders.

In academia there's a culture of working your ass off to get tenure. You're led to believe that after tenure everything will be fine, but that's not true.  As a faculty member you always have so many different things to do. You're a hiring manager, you're an accountant, you're a reviewer, you're a conference organizer, you're a committee member for committees you might not even care about… and often there are no clear objectives or key results you need to work towards. And then you have to present your CV to your merit committee for your tenure review and ask, ‘Did I do well?’ It all felt arbitrary and it was very hard for me to navigate that world.

In industry you are given a role, and there are specific things that your role does. You have projects that we're working on and that's all you do. That works much better for me.

Dave:  So, what are you doing now?

Unfortunately, shortly after I started at Calm the company laid off 20% of the workforce and my team was part of that. Before I left academia, I had been consulting for a company called Noom, so I was able to get a job there. Again, I was very lucky that I had connections to get that job. My colleagues who also were laid off are having a harder time finding jobs without having an inside contact. I tell people to find a way to secure a connection inside a company, even if it’s with just one person.

Matt:    Yeah, it doesn’t work well at all. Having those connections really made all the difference for me. When I talk to people who are thinking about transitioning out of academia, I tell them to put more of their energy into meeting with recruiters for positions they're interested in than applying to online jobs or forums on LinkedIn. And it’s even better if you can connect with a potential colleague or a hiring director.

This site uses Akismet to reduce spam. Learn how your comment data is processed.

Want to learn to play the game?